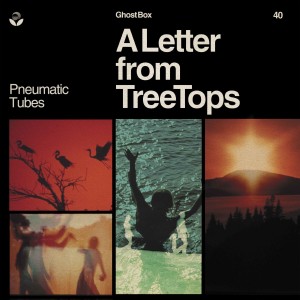 A Letter from TreeTops is the debut album from Pneumatic Tubes, the solo project of multi-instrumentalist Jesse Chandler. Grounded here in his own bucolic makings, Chandler opens his imagination to the world with this very personal and contemplative album. It’s a kind of American Kosmiche Music, a paean to the wild landscapes of the Adirondacks and Catskills of Upstate New York where he grew up. (TreeTops is the name of a summer camp, fondly remembered by several generations of the Chandler family.)

The album came to Chandler almost as an automatic transmission. Shortly after the death of his father, he holed up alone in the old family home with a few synths, a couple of vintage keyboards, percussion instruments and of course his beloved flutes and clarinets - the “pneumatic tubes” of his nom de plume. Channelling raw memory and landscape, Chandler laid down most of the material for this mystical and elegiac suite of music in just a few days. He later called on some talented friends to flesh out the final recordings; Paul Alexander on bass, Bill Campbell on drums, Marissa Nadler backing vocals and Robert Gomez on electric guitar.

The result is a series of beautifully faded musical photographs. Gentle melodies are propelled along by synth arpeggiators or laidback sidestick and felt beater drums. Chandler’s wind instruments are woven throughout like wild vines binding the elements together. Towards the end of the album an underlying note of melancholy swells into grief during the very moving Witch Water, which is subtly underpinned with Marissa Nadler’s haunting voice. The clouds soon clear, the mountains reappear, and the wheel of the year and of the generations turns again as A Letter from TreeTops signs off with the same lilting melody on which it began.

Originally hailing from Woodstock, New York and now living in Denton, Texas, Jesse Chandler is the keyboard and woodwinds player for the bands Midlake and Mercury Rev. His particular warmth as a composer and improviser is informed by a childhood ensconced in the mystical Catskill mountains, where he absorbed the area’s rich musical history and developed a fascination with keyboard and woodwind instruments.

A Letter from TreeTops is not his first appearance on Ghost Box, he also contributed organ and flute on the Soundcarriers’ incredible Entropicalia album.

Evocative liner notes are provided by Justin Hopper, author of Old Weird Albion and writer of the Ghost Box spoken word album Chanctonbury Rings. By happy coincidence Hopper also grew up in New York State and has his own deep connection to the landscapes there.