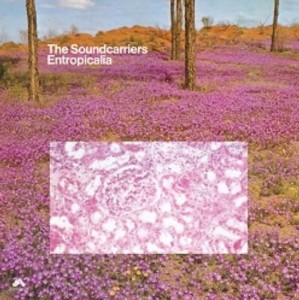 Phosphonic announce the first in a series of highly anticipated reissues from Nottingham’s ‘The Soundcarriers’. ‘Entropicalia’ was originally released on Ghost Box Records in 2014 and is now presented with new artwork, remastered on 180g black vinyl with a heavyweight tip on sleeve. There is also a CD edition.

“The Soundcarriers raid and regurgitate decades of rare vinyl so you don’t have to, recombining their findings in a hallucinatory record collector’s fever dream of found sound. Kitsch exotica from 1950s, 1960s Carnaby Street exploitation, 1970s German progressive percussion and swinging South American Tropicalia merge their time streams seamlessly in the soundtrack to a spiked cocktail night out in the composite European capital city of the collective subconscious. Let the epic groove of This Is Normal puncture the irony membrane and you’re sold.” Stewart Lee.