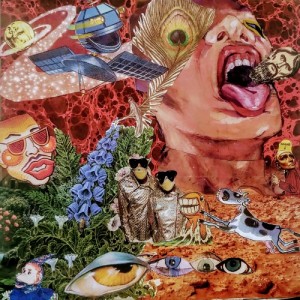 Here’s a superb new album on Polytechnic Youth, the last of the label’s trio of recent CD releases, aimed partly at circumnavigating the crazy world of vinyl pressing just now. The third here is an absolute beauty- by a country mile the label’s most bonkers, whacked out release, sample heavy, dancefloor friendly and all interspersed with voiceovers / track intros from Charlie Pellett of NY subway system announcement fame!

17 tracks, clocking in at over an hour (the CD’s biggest saving grace?) including a bunch of extras not included on PY’s mailorder LP edition from a couple of years back that sold out same day and is now a £30+ record. This is a nice opportunity to hear the album in full and is released as a one time pressing of 500.

“Formed in 2018, the London based duo fuse breakbeats, synths and samples to create eccentric alternative dance music, twisting and bending sounds into their own distinctive style using a vast collection of vinyl 45s. Their endlessly intriguing world has already drawn comparisons to the likes of DJ Shadow and Death In Vegas. With a backbone of funk and soul they blend together many different genres including ambient, trip-hop, dance, disco and more, creating a new form of sample-heavy, dancefloor-friendly electronica. ‘Journey Of Echoes’ is exactly this: a fusion of analogue grit, psychedelic colour and a mass of ramshackle ideas, and in a world where it's almost criminal to be joyous and inventive this is the soundtrack of a rebellion!”