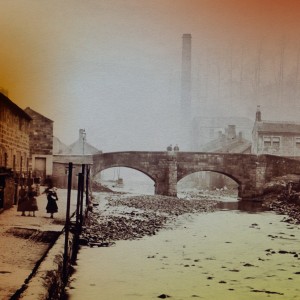 Birthed in the bohemian enclave and epicentre of strange vibrations that is Calderdale in West Yorkshire, Hexen Valley’s story began in summer 2021 when a new formation of Gnod came together in a co-op house at the 200-year-old Nutclough Tavern. As always, the line-up of the collective shifted and morphed to fit circumstances, and soon they embarked on intensive jamming that was eventually captured by Sam Greenwood in Hebden Bridge Underground studios.

Inspiration struck not only from the chemistry of the four musicians in this confined room but all around - the band’s Paddy Shine cites the likes of shop noticeboard messages and pub conversations in Hebden as lyrical sparks; channeling by his reckoning the ‘valley fever’ that exists somewhere in the chasms and contrasts between the amazing light and vivacity of the valley summit and the comparative darkness of the towns below.

Meanwhile, musical shapes were making themselves known seemingly of their own volition, from ‘Still Running’, which takes shape across a sonic hinterland between Daydream Nation-style kineticism and sludged-out aggression to ‘Bad Apple’ - an entirely spontaneous piece of potent and angular post-punk intensity. Perhaps most surprisingly of all, Lou Reed’s tour-bus favourite ‘Waves Of Fear’ is hammered out with fearsome gusto into a salvo of first-take catharsis and alchemy, fit to transcend all or any oppressive atmospheres that surround.Hexen Valley is the sound of a band whose fearsome intensity is only matched by their evolutionary drive.

It’s Gnod at full power, and it’s a haunted place you might struggle to leave

GnodEasy To Build, Hard To Destroy