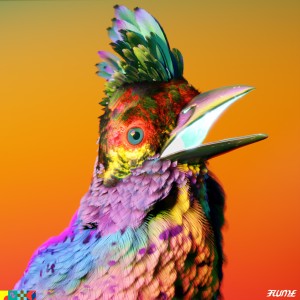 Palaces began to take shape when Flume returned to his native Australia after struggling to write music in Los Angeles at the beginning of the pandemic. Settling in a coastal town in the Northern Rivers region of New South Wales, Flume quickly found the inspiration he needed through reconnecting with the nature around him—the rolling hills, walking around barefoot, the green colour the sky turns before a big storm, growing and eating his own vegetables, the smell of rain. He and his neighbour and long-time collaborator, the visual artist Jonathan Zawada, became fascinated by the local wildlife, in particular the birds, collecting field recordings that ultimately worked their way in to the album. As Flume continued to forge a strong connection to his surroundings, the album he wanted to make started to form, eventually adopting a title to properly highlight the luxury and magic of the natural world. Palaces is his most confident, mature and uncompromising work to date, a true testament to nurturing the relationships that make us whole and bring us peace.

Barry says: Though there are moments of blissful synthy contemplation (closer 'Palaces' with Damon Albarn for example), most of the LP comes off like a more experimental version of Flume's 2016 outing, 'Skin'. It's richly textured, cleverly produced and swimming with moments of pure euphoric bliss.