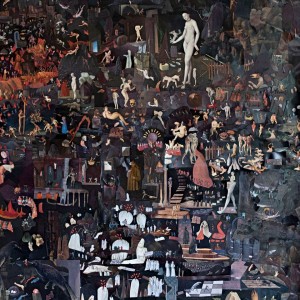 That devil-may-care spirit is present on each and every song on Night Gnomes. With guitarist Luke Parish, drummer Danny Caddy, bassist Wayon Billondana and multi-instrumentalist Chris Young by his side, McEwan bunkered down in his home studio, creating a sonic pastiche that almost sounds like turning the dial on a temperamental old radio every few minutes. “A lot of these songs are structured from the beginning, but then we add another part towards the end to really keep it interesting, even if it’s just for ourselves,” he says of the project, which was recorded at McEwan’s home studio in and around Perth. “Like on Fleet Foxes’ “Helplessness Blues,” every song has an ending that is completely different than the first part. That was the idea here.” Hence, distorted synths giving way to and then enveloping the lighter-waving riffage on opener “Terminus, The Creator,” a magnificent string section suddenly appearing on the nostalgic acoustic folk ditty “Dread and Butter” and a dizzying array of sounds linking arms on the title track, which imagines the proverbial creatures frolicking around a campfire in some far-off, mystical forest. “It feels jolly, but it’s also kind of terrifying and disturbing. My girlfriend told me she couldn’t listen to that song,” McEwan says of “Night Gnomes,” adding, “I’ve always liked how some Beatles songs just come out of nowhere, like “Mean Mr. Mustard.” This is our own little jingle that doesn’t fit with anything else on the record.”

On “Bubblegum Infinity,” the Crumpets waded through nearly 50 different variations of the track before a Eureka moment during a rehearsal jam session revealed its final structure. The song itself wound up as a commentary on the often rudderless nature of the COVID-19 pandemic and “taking comfort in the fact that nobody had a clue what was going on,” according to McEwan. “The song used to open with a huge riff that was sidechained to the kick drum so it sounded like it was thumping, but then that's how every Crumpets song starts. I swapped the heavy guitars for acoustics, which made it feel way stronger, both dynamically and sonically. It felt like we'd uncovered the clutter which guides the song to build into that chorus and not give anything away beforehand.”

McEwan is particularly proud of the dreamy “Sherbert Straws,” which he says “actually has some dynamics in it rather than having nine elements in the same spectrum as my vocals that I’m trying to constantly mix in and out of the track.” The song descends from the proud lineage of Australasian rock acts such as Tame Impala and Unknown Mortal Orchestra to whom McEwan professes devotion. “When we formed back in 2015, we marveled at how these awesome bands from around here could self-release music on vinyl and create their own stories. There wasn’t any waiting for labels to come knocking. It was all DIY and we loved that concept. We’re still holding right onto those coattails and we’re getting dragged as far as we can,” he jokes. For all of its varied vibes, the album never skimps on massive rockers sure to delight Psychedelic Porn Crumpets fans across the world in 2022. “Acid Dent” thrashes with abandon, but actually offers a slight concession to advancing age. “When we were younger, we were carefree and living tall, “McEwan says. “You get home with a handful of stuff in your pocket from whatever festival and just munch all of it, until you wake up in the morning so scattered. If we kept carrying on this way, we’d wind up in mental institutions by 35. So this is a nice little story about slowing down a bit.”

“Bob Holiday” pays homage to classic riffs McEwan remembers from his youth, like Lenny Kravitz’s “Are You Gonna Go My Way?” “We’ve been trying to emulate that sound forever,” says McEwan, who also played in a Rage Against The Machine cover band when he was younger. “I also thought ‘Bob Holiday’ was a really strong name — like, if you were called that, you’d be able to do anything.”

The album comes full circle with the one-two closing punch of the instrumental “In Dreams, Out” and “Slinky/ Holy Water,” touching again on the thumping drums, acoustic guitar flourishes, washes of sound and strange noises introduced on the opening track. With the pandemic having provided McEwan the chance to “get my life together and get healthy,” not to mention move 200 meters from his favorite pub, he and his bandmates will soon be onto their next musical adventure. But exploring the undiscovered territory of Night Gnomes has already made a major impact on its creators.

“I have no idea what I’m doing half the time,” McEwan says. “It’s like, plug in, record. Why does this sound like shit but this other thing works? I needed five albums to get to this point of revealing some golden nuggets of information about dynamics, production and exploring new sounds. Everyone finds fault in their own work, but that’s probably what makes us want to keep creating.”