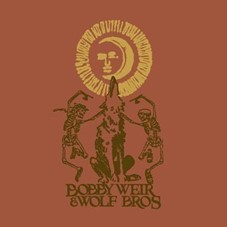 Bobby Weir & Wolf Bros: Live In Colorado features a collection of songs recorded at the band’s live performances at the historic Red Rocks Park & Amphitheatre in Morrison, Colorado and the Gerald R. Ford Amphitheater in Vail, Colorado on June 8, 9, 11, 12, 2020.

These shows were the group’s first live audience concerts in over a year and featured Greg Leisz on pedal steel, along with The Wolfpack: Alex Kelly, Brian Switzer, Adam Theis, Mads Tolling and Sheldon Brown. “Been too long,” Weir said of the performances, “but I can’t think of a better place to pick it back up…” Weir explains “I’ve been workin’ in my spare time on expanding the sonic coloration of the songs I do. The Wolfpack is basically a step toward full orchestration - and further, I gotta say, these guys are game. We worked on the arrangements a bit but eventually we needed to trot it all out and play it for folks - and right at that moment, the folks in Colorado reached out and told us they were gonna open up. Holy Shit, WTF? Let’s Go.” Third Man Records says “When Don approached us about this project of course we all jumped at the opportunity. The whole live music experience is so important to everyone here at Third Man Records and the chance to work with a few of the all time greats, well it seems like a miracle.”