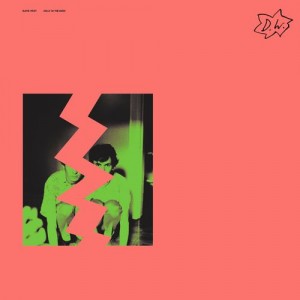 RIYL: Felt, The Wake, The Servants, Sarah Records, Rat Columns, The Reds, Pinks and Purples. Jolly In The Bush is David West's fourth eponymous record, following Drop Out Of Collage (2014), Peace Or Love(2016) and Cherry On Willow (2017).

David is an underground pop musician from Perth, Western Australia and has been in numerous interesting and more-or-less obscure acts over the decades - some include Rat Columns, Rank/Xerox, Total Control, Lace Curtain, Liberation, Burning Sensation and Scythe. His solo works allow him free reign to follow various classic and sideways pop rainbows to their illogical conclusions. On Jolly In The Bush, he is graced by the angelic presence of stellar musicians, such as Louis Hooper from Rat Columns, Bob Jones from Eaters/P.E, Mikey Young from Total Control/Green Child/Eddy Current Suppression Ring, and Richard Ingham from Taco Leg/Mink Mussel Creek.

Jolly In The Bush is a homage to shaggy indie dorks, sub-tropical singer-songwriters, robotic melancholia and the pre-Cold War 'grown and sexy' aisle at the Marina Safeway. The first side of the record sees DW straddle the indie rock horse, indulging in lyrical detours into historical fiction (‘1816’), naughty words (‘The Poet Of My Dreams’) and mumbling (‘Sleeping Head’). 'Sleeping Head' features a startlingly egotistical self-sampling of David and compatriot Bob Jones' atmospheric electronics project, Scythe, and their tune of the same name. Idea glut, or deficit? DW and his team challenge the seemingly pervasive professional competence rife in today's indie rock world. 'Keep indie rock shambolic' seems to be a theme close to his heart. However, a disturbingly serious side emerges in the middle of the record with two minimal, acoustically-minded numbers, 'Not That Lonely Yet' and 'Letters From Home'; light in feel, depressing in subject matter.

A pleasing but perhaps formulaic shift in atmosphere guides us into Side B. Keyboards are deployed, synthesizers twinkle, beats hit us at a steady, head-nodding pace. 'Prove Your Love' sentimentally shimmies in the light bouncing off the marina's placid waters, 'You Must Be My Friend' is a downtempo electronic paean to illusions lost. 'You Saved My Life' sees our weary traveler finding fleeting succor in jazzy changes and a stranger's touch. Lest it all get too much, 'So We Ran Away' dusts off the glam boots worn on the Cherry On Willow LP but takes them down to a sub-basement chintz floor for a prancing romp through romantic insanity. Please, join us and become Jolly In The Bush!