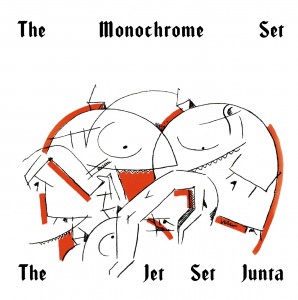 The Monochrome Set were something of the unsung heroes of the post-punk world; they fitted into absolutely no category whatsoever and their puckish take on spaghetti western soundtracks meets lounge jazz via the twisted lyrical imagery of vocalist Bid was as singular as it was unique.

Comprising a couple of ex-Ants in Andy Warren and Lester Square, with singer / guitarist Bid and drummer JD Haney, their filmic, playful material found favour with many, including John Peel although they failed to match this with commercial success.

The Jet Set Junta was originally released on Cherry Red in 1983 with its urgent, ringing guitars surrounding Bid’s lyrics telling of dodgy arms dealings and armoured limos as Lester Square’s Ennio Morriconetwang bends and reverbs as a counterpoint.

Side A
The Jet Set Junta
Side B
Love Goes Down The Drain, Noise (eine Kleine Symphonie)