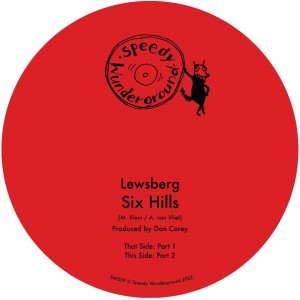 ‘They’re probably the band that over the years we’ve wanted to work with the most’ says label co-runner Pierre Hall. ‘Me and Dan (Carey) were completely obsessed with that first album (Lewsberg, 2019). For me they were like the nearest thing to a modern-day Velvet Underground I’d ever heard/seen – and we watched them a couple of times on that tour and were just blown away. Especially by the guitarist. They had that feel of a band that was just yours, a secret – that only a few people knew about – which is why I suppose we didn’t really pursue them at first. They seemed kinda perfect. Plus we were probably scared they’d say no’.

Eventually fortunes did cross and the label decided to reach out at the start of 2020. After a few gushing emails and a clear common DIY aesthetic – the band agreed to partake, but then COVID hit – meaning –due to the band’s location, recording couldn’t commence until almost two years later. For a label that prides itself on being ‘speedy’ it wasn’t ideal. ‘It was so annoying’ continues Hall, ‘but not the end of the world in the grand scheme of things. Plus we felt like we had this this little golden egg in the bag – waiting to hatch.’

And hatch it has. Following on from the bands softer (but no less effecting) recent gem of a mini-album ‘In Your Hands’ – ‘Six Hills’ harks back to classic first-album Lewsberg – conveying all the attributes that made the label fall in love with them in the first place. Motorik drums, simple immediately-catchy guitar riffs, understated production with otherworldy guitar solos – hitting all the right reference point – Velvets, Television, Jonathan Richman – wrapped up in something that is completely their own. Coupled of course with those detached, deadpan, but engaging vocals, Arie (van Vliet) sharing duties on this occasion with the band’s bass player Shalita (Dietrich).

Of the track – the band philosophise in their own sardonic wit – ‘When you keep fighting over things that are really important to you, you could decide to stop arguing with people, and try killing them with kindness instead. You might find out this works. Then, accidentally, you might also find out that you don’t even have to kill. You might just as well just be kind. But it’s a thin line. Sometimes, it can even be kind to kill someone.’

Lyrical prowess and a devastating turn with a couplet are a power the band have in spades – even clearer here with lines such as ‘you meant to enter like a lion / but then you walked in like a lamb.’ The visceral imagery of the bands writing paired with the let-loose, ragged, it-could-all-fall-apart-at-any-minute-but-it-doesn’t nature of the music makes for a completely compelling listen – and a stone-cold addition to the label’s already stellar canon of singles.

Sometimes the old cliches are best: Good things come to those who wait.