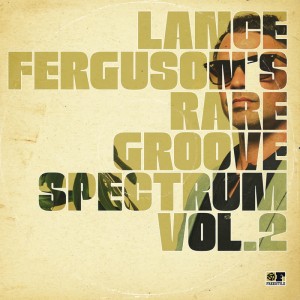 Rare Groove Spectrum Vol. 2 is another solid collection of re-works and re-imaginings taking in a broad range of classic tracks, traversing jazz funk rarities, balearic digs, latin groovers and more. Backed by a stellar group of Melbourne musicians including members of The Bamboos & Menagerie, Lance continues the tradition of creating "live re-edits" demonstrated on the initial volume - all pulled off with an inimitable style and playfulness, though always with an obvious love for the foundations.

As Lance says: "Some of these versions can almost be looked at as DJ re-edits, sometimes we're extending what may be a really short track into something longer, or teasing out the elements in a song that really make it work on a dance-floor. It's essentially what someone does with a club re-edit, except we went the extra step and re-recorded the whole thing with a live band"

From Carly Simon through to Mongo Santamaria via Marcos Valle and Pat Metheny - and following the championing of Rare Groove Spectrum Vol. 1 by the likes of Gilles Peterson, Craig Charles, Jazz FM and more - this second volume of Lance Ferguson's Rare Groove Spectrum is sure to hit the sweet spot.