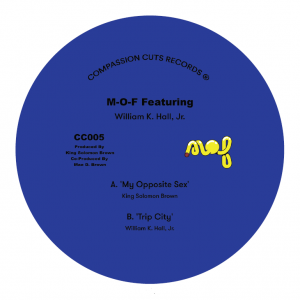 OK, we know this one comes with a big price tag but it's an almighty coup for Compassion Cuts. 2 house cuts with lashings off disco flavour taken from M-O-F's 1990 debut and only release, the "Natural Vibe" LP on the private press Future Step Sirkle label. Mega elusive and somewhat of a holy grail for early house collectors, this is the first time these tracks are released on 12" and there's only 400 of them to go around with absolutely no digital release to accompany it. Keeping this gem from spilling too much overground you've gotta salute Compassion Cuts for letting the attentive in on the action!

You'll struggle to comprehend "My Opposite Sex" is from 1990. Ridiculously chunky, heavily swung and packing a serious punch, the rolling congas, playful childlike vocal hook and a flavour so punky-funky it'd make ACR and ESG reconsider their next career move this fist pumping proto-house bomb will tear the down the roof and have people dancing on tables in no time.

"Trip City" rolls on even more of a disco groove, big timpani lines, wandering clavs, smarmy max and driving 4/4 drums all kettled under duress by a bossy slap bass line that takes noooo shit. One of those jams you'd expect Theo, MCDE or Young Marco to unleash to the masses, I've defo not heard this out and about much (and all?) making me think it's not totally blown up YET. (spoiler: it will).

Martin says: Super rare proto-house / disco-not/disco unearthed by the intrepid Compassion Cuts and bucking like a mule. Leftfield dancefloors are gonna rip the roof off when they hear this!

My Opposite Sex
Trip City