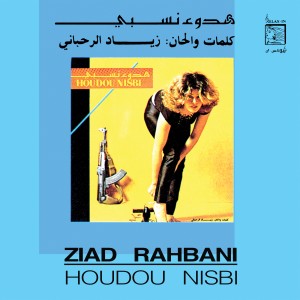 Mixing funk, jazz, boogie, it is released for the first time on vinyl with remastered audio and new liner notes by Lebanese DJ and curator Ernesto Chahoud. In the early 80's, Rahbani created a landmark album, 'Houdou Nisbi' now considered one of the best jazz funk albums from the Middle East. Featuring such cult tracks as "Rouh Khabbir", a remake of the Crusaders' "Soul Shadow" sung by Rahbani himself, the modern soul of "Bisaraha" and the Brazilian flavoured "For Sure", the album is both effortlessly groovy and steeped in Oriental music. Held as "one of Lebanon's best kept Musical treasures' by Ernesto Chahoud in his notes, the album is a certified Rahbani cult classic.

"Houdou Nisbi," which means "relatively calm", an expression used by news anchors on Lebanese TV to describe the mood during cease-fire in the civil war between 1975 and 1990 - has been remastered for vinyl from the original masters by David Hachour at Coloursound Studio in Paris. The artwork has faithfully been reproduced for the enlarged format. An iconic cover highlighting the strange life in war ravaged Beirut during the cease-fire and in line with the political stance of Rahbani, a self proclaimed non- religious leftist. Wewantsounds is delighted to bring the first-ever vinyl release of this iconic album to the world.