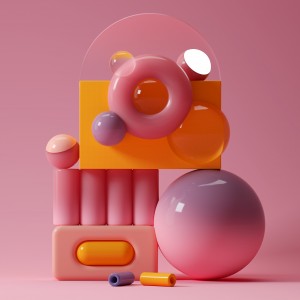 Inspiration can strike anyone at any time, and more often than not from somewhat peculiar quarters. Rarely more so than when Sam Grant - thus far best known as guitarist and producer of Pigs Pigs Pigs Pigs Pigs Pigs Pigs - finally set about work on a solo project that had been pursuing him for some years. “I want people to imagine that feeling of rubber - its physical memory, the unnatural vibe of it. It’s so tactile but alien. It’s an odd analogy, but that’s what this music is for me.”

A specific gravity is one more property that rubber has going for it, and that much is certainly true of Rubber Oh’s debut album ‘Strange Craft’, the result of his elasticated fixation, and his debut album of deliriously tuneful sci-fi tinged psychpop. It’s a unique soundworld in which an emphasis on beguiling melody marries a kaleidoscopic grandeur. Widescreen gems like the warped interstellar voyage that is Children Of Alchemy and the unshakeable earworm Hyperdrive Fantasyare all vibrant colour and celestial energy, setting their psychic stall out somewhere between the incandescent headspace of a ‘70s sci-fi TV show and the red-light-fever of the overheated ampstacks Grant has been historically more familiar with.

Ultimately, for Grant as well as everyone else, Rubber Oh amounts to one strange trip - “Many of the lyrics are about alchemy, journeying and vessels, as interchangeable metaphors for knowledge and wisdom” he says. “I wanted to mesh the land and sea, the cosmos and the psyche across the tracks as one single plane” Mission accomplished, in short. This Strange Craft is fuelled up and ready to accept all comers on a ride into extensions through dimensions