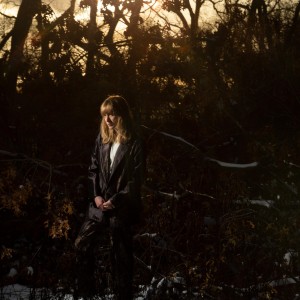 How Is It That I Should Look At The Stars was written in the same fruitful winter of songwriting that gave rise to Ignorance, but were songs that Lindeman felt were too internal, too soft to fit on the album she had envisioned.

Not long after completing Ignorance, Lindeman decided to make this album on her own terms, fronting the money herself and not notifying the labels. She assembled a new band, and communicated a new ethos; the music should feel ungrounded, with space, silence, and sensitivity above all else.

On this record, there are no drums, no percussion; in the absence of rhythm, time stretches and becomes elastic. Lyrically, many of the songs return to what has often been a hallmark of Lindeman’s writing; a description of a single moment and all the meaning it might encompass. And this dilation of the moment occurs musically too; as the band moves through music so ephemeral it often incorporates stretches of near silence, and breaths, single notes, and brief solos take on greater importance in the absence of other sound. Whereas the recordings on Ignorance leaned towards ambition and grandeur, here the band reaches towards a different goal; grace perhaps.

How Is It That I Should Look At The Stars was recorded from March 10 - 12, 2020. When the band entered the studio, Covid-19 was a news item, not front of mind, but by the time they left, just three days later, everything had changed. Somehow, the music captures that instability; it is ungrounded and diaphanous, it floats and drifts. It is an album of immense sensitivity, a recording of a band and a person daring to reach towards softness without apology.

Barry says: A mostly unadorned collection of swooning piano pieces, reminiscent of country rock but a lot more intangible. Otherworldly and veering towards modern classical in parts, but with a firm footing in the realms of folk and pop songwriting.

The Weather StationAll Of It Was Mine - 2021 Reissue