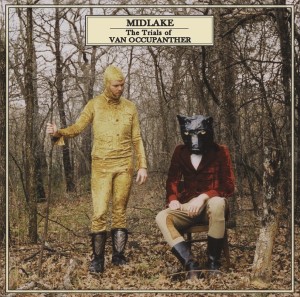 Midlake are a relatively small indie band, so the level of ambition they display on ‘The Trials of Van Occupanther’ is to be commended. From the opening track, ‘Roscoe’, with its laconic lyrics and slowly building chorus, they manage to recreate perfectly the sound of 1980s Fleetwood Mac, a band not known for thinking small.

And though the rest of the album doesn’t quite reach the heady heights of this opener, it’s not for a lack of trying (particularly on ‘Head Home’). The remainder of ‘The Trials of Van Occupanther’ is considerably more downbeat, with distant flutes complementing the vocal harmonies of songs like ‘Bandits’ and ‘Branches’.

Where Midlake particularly excel, though, is when, like Grandaddy before them, they draw their inspiration from the classic rock that they seem to love so much, adapting and modernising it. So in addition to the anthemic ‘Roscoe’, they evoke the Gram Parsons-era Byrds or even The Band on ‘Van Occupanther’ and the road-ready ‘It Covers the Hillsides’.

‘The Trials of Van Occupanther’ is an album that's steeped in musical history yet possessing an identity all its own.

Released on 180g gold vinyl to celebrate a new Midlake album for 2022 and also the 15th anniversary of ‘The Trials of Van Occupanther’ last year.