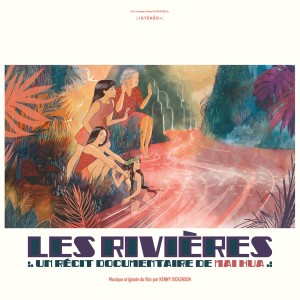 We finally made it: BEWITH100LP! And what better way for a reissue label to celebrate such a landmark catalogue number than to give it to a record of new music. We couldn’t resist when the artist is Official Be With Family Member Kenny Dickenson and when the music is his lovely, lovely score to French-Vietnamese artist Mai Hua's 2020 documentary film “Les Rivières”. If you enjoy the more minimal, intimate piano of the likes of Nils Frahm or John Carroll Kirby’s solo work, you’re certain to fall for this beautiful album.

Taking six years to make, Mai’s film explores what happened when she brought her dying grandmother to France, pulling together four generations of women from the same family. Kenny’s score accompanies all the pretty things, sad things, dirty, beautiful, happy, broken and reborn moments of these women’s experiences.

The whole score is built around delicate, sparkling piano motifs. At times they’re joined by cello and complemented with ambient chords and other flourishes. It’s a very particular palette that Kenny and Mai established early on, as Kenny explains: “We had agreed on a particular sonic aesthetic early on in the process - to use specific and relatively minimal instrumentation, reflecting the intimacy of the picture. So piano and cello were quite prominent in instructing a sense of space and immediacy. Until I had to get the junkyard percussion out… ”

When it comes to describing the end results, Kenny’s happy to wear his influences on his sleeve:

“When the director and I sat down for the creative meetings early in the process, we watched ‘Wolf Children’, a Japanese animation film by Mamoru Hosoda. The amazing soundtrack by Masakatsu Takagi was a launching point for me and thereafter I leaned into more modern classical composers - Reich, Sakamoto, Glass as well as Jon Hassell’s Fourth World output. Richard Reed Parry’s ‘Music for Heart and Breath’ was a good early touchstone for me and Mark Hollis’ sparse, considered and deliberate approach was a constant presence. Also labels like Ghostly, ASIP and the ubiquitous Erased Tapes should probably get a nod here too…”

We’d even suggest there’s the occasional Yann Tiersen moment in there too.

Out of sheer necessity the collaboration between Kenny and Mai continued beyond this initial creative direction. With Kenny speaking neither French nor Vietnamese, Mai acted as translator, a process that naturally lead to discussing the film beyond just what was being said in the footage. Mai herself explains just how successful this relationship felt to her: “Music plays a very important role in all my work, particularly in Les Rivières. I cried every time Kenny sent me a new composition. I felt understood in a way that words cannot describe. It was absolutely magical and I am so happy if this music can make your soul vibrate too.”

Kenny composed much of the music in London, at the same time that Mai was shooting and editing. As the film took shape and the music also evolved, another challenge presented itself when Kenny relocated to Los Angeles part way through, resulting in Arnulf Lindners beautiful cello taking on new shapes- multi sampled, played and manipulated by Kenny into new compositions.

What Kenny has put together for the film score release is definitely a “soundtrack LP”, with the music arranged to work as a proper album in its own right that should be listened to from start to finish. Indeed the album also includes a new piece “Pour Marthe” that Kenny composed in memory of Mai’s grandmother who died after the film was finished.

Kenny’s personal highlight is also ours: “When I listen back to the album as a whole now, I never want part II of the Trilogy (Belles Larmes) to end. I have fond memories of recording it and I love how the dynamic of the piece gradually evolves from falling on the ‘1 and the 3’ to the ‘1 and the 2’. It’s so short and sweet, I keep wanting it to last for longer. But it’s kind of perfect as it is.”

Pretty much our sentiment for the album as a whole.

Running a record label means we often get asked advice about pressing a record. In this case the music was too good not to offer to release it ourselves. To Kenny, having the Les Rivières score on vinyl also feels like the final part of the project.

“It’s a beautiful thing to have it on vinyl. It’s quite an intimate soundtrack so there’s something really perfect about being able to listen to it on that format. When I was a kid, my Uncle Pat who used to work at Woolworths would visit and bring random records from their record department over to us. I can remember listening to “Theme From Exodus” by Ernest Gold. I had no idea what it was about but the imagery it conjured up when listening to that record was just mind blowing to me at that age. Soundtracks can have their own life on vinyl I think, and removed from their original context is this unique format for reinvention. So I’m excited that people who haven’t (and have for that matter) seen the film can have that experience.”

This might not be a re-issue, but the Les Rivières film score album has still been given the full Be With treatment. The vinyl has been mastered by Simon Francis (under Kenny’s ever-watchful eye/ear, of course), cut by Pete Norman and pressed at Record Industry. The sleeve follows the film’s poster and other promotional material, including Lucile Gomez’s almost magical illustration.

We’re under no illusions that many people reading this will have seen “Les Rivières”, but that doesn’t really matter when it comes to listening to the score. Just on its own, Kenny’s music still captures the robustness and the delicacy of lives lived.

Reuben Vaun SmithSound From The Workshop