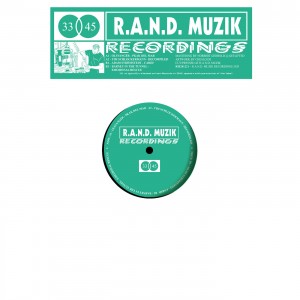 Olsvangèr kicks us off with the rolling, tribal-tinged tech-house of "Pkak Del Mar" - a weighty bassline and echoed percussion parts keeping us locked into this late nite groove. Tim Schlockermann offers up a lighter, skippier number via "Decompiled" which has hints of that mid 90s deep house vibe with its cheeky vox samples and glowing pad stabs.

Onto side B and Adam Stromstedt gets technical on "Cand"; deploying highly intricate breaks and glitches across deep Reese bass and more echoed percussion artifacts flying around the mix. A post 3AM rumbler of the highest order! Finally, Barney In The Tunnel concludes with the acidic & corrosive moody techno of "Emojional Rescue".

Matt says: The good folks at R.A.N.D. Muzik deliver another all star comp. If you're searching for the freshest late night club sounds then look no futher! Imperative stuff from the underground. Check!