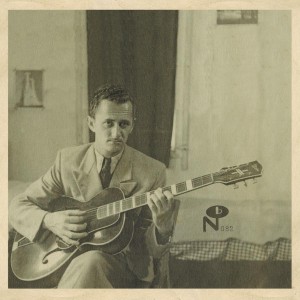 A beautifully haunting and plaintive collection of songs, the album stands as a refracted echo of an imagined life as it may have been in an old country of long ago. With songs reaching out through time and space, it captures a fascinating musical and personal journey of a man displaced from his native Dalmatia (now Croatia) during WWII who eventually ended up in Los Angeles in the mid 60s via time in a German labour camp, West Yorkshire and Canada.

Born in 1923 in the coastal town of Bekar, Branko and his family arrived on North Hollywood in 1964. Abandoning his previous profession as a barber, he began to focus on guitar repair and taught himself to fix various related instruments and studio gear. Establishing his own fully-furnished home workshop, it was here in the garage at 5811 Satsuma that Branko skilfully hand crafted and built guitars and recorded his two albums.

Branko's total DIY approach resembles that of Les Paul, or homespun experimenters like Danny Gugliemi. His focus, it seems, was as much about teasing out new sounds as it was on the songs themselves. It's unclear how much of Branko's techniques derived from researching his musical peers, but it seems likely most of his tricks were developed in the isolation of the garage. He utilized sliding pickups to change the tenor of recordings and a spinning Leslie speaker to create delay effects and his experiments with tape, which resemble various delay techniques later mastered by Robert Fripp and Brian Eno, must have been like nearly every skill Branko ever acquired — self-taught.

Branko had "an incredibly large collection of vinyl," according to his son Bata, but "I never saw him listening to any of it." Bata is unclear on whether the traditional songs came from records, or from memory. The songs Branko selected to record for his debut album represent a sort of epic mixtape of longing and sentimentality. Traditional music played on traditional instruments — flutes, lutes, bagpipes and psalteries. Aside from Branko's music, the guitar, electrified, has absolutely no place in traditional Yugoslavian music. Branko would play the same handful of songs on the guitar "over and over and over and over and over, for hours and hours," said Bata. "The only thing that would stop him from working on guitars or playing his music was the World Cup." Other than that he was in the shop, where he would smoke his pipe, and repair instruments, practice, and record.

The exact date of release is unclear, but Traditional And Folk Songs Of Yugoslavia appeared sometime around 1973. The album came out on local label for hire Essar Records, run by Steffano Riggio, an Italian immigrant who liked Branko in part because they spoke the language together. The album was played on a few local Serbian radio stations but gained very little recognition beyond that, and Folk Songs of Serbja, his second album, followed maybe 10-15 years later, probably in the mid 80s. It didn't have a formal release; Branko just handed out copies here and there to visitors.

As much part of the tale of this magical, shimmering compilation is the eventual unearthing in 2005 of his debut album.

In 1924, John Filcich was born in Fiume, Italy, now Rijeka in Croatia. Like Branko Mataja, Filcich came to America as a young man. In 1949, Filcich, a lifelong folk dancer and lover of musical folk culture, began Festival Records, a store and distributor dedicated to the dissemination of international music. The first Festival shop opened in Oakland; Filcich took over a second in San Francisco in 1958, and moved to Los Angeles and started his third in 1964.

At some point along the way one Festival employee began to take home records from the Los Angeles store, every once in a while, slowly enough to avoid notice. Over the course of two or three decades, this employee amassed one of the largest collections of international music on the west coast. Sometime around 2005, that collection, including Branko Mataja's record, found its way to Counterpoint Records & Books in East Hollywood

That same year, a Los Angeles musician named David Jerkovich was exploring his musical roots as the son of Croatian immigrants who settled, like so many others, in the sleepy Southern California community of San Pedro, near the major port city of Long Beach. The upbeat and saccharine Yugoslavian popular music, as defined by the official state label Jugoton, was far removed from the nation's folk music. Largely ignored by Jugoton, it was more brooding, wistful, and often weirder in nature. One day Jerkovich bought a half-dozen private titles (pretty much any Yugoslavian record not on Jugoton may be regarded as private) for $7 each from the back room of Counterpoint Records & Books in East Hollywood. One of those records was called "Traditional and Folk Songs of Yugoslavia" by someone named Branko Mataja. From the first notes, the record's magic was unmistakable. It was, Jerkovich immediately realized, the "emotionally saturated" crown jewel of his search — the LP he'd been searching for all along without knowing it. He played it for his roommate, Douglas Mcgowan a future consultant A&R at Numero Group, who would eventually green-light the records re-issue and sympathetic re-mastering by Jerkovich himself. Branko Mataja never went back to Yugoslavia and eventually died of a heart attack in St Joseph's Hospital in Burbank in 2000 . "He never looked back," said Bata his son, yet Traditional And Folk Songs Of Yugoslavia stands as a sublime, ghostly, deeply cinematic and sentimental celebration of a land and music long-left by a man who ended up a long way from home.