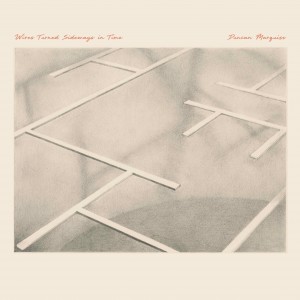 The Phantom Band guitarist, Duncan Marquiss's instrumental solo (ad)venture finds electronic guitar manipulations intertwine with wandering acoustic ambience. With one foot in 1970s Germany and the other in the woods, rivers and mountains of northeast Scotland.

“I like it when music builds itself up in an organic fashion,” says Duncan Marquiss. “When it just seems to emerge and almost writes itself.”
This natural, intuitive and free flowing approach is evident all across the debut solo album from the multi-disciplinary artist. From tender yet sweeping acoustic moments to experimental electronic guitar manipulations, the album feels like a ceaselessly sprawling exploration of texture and tone. Despite veering into what sounds like electronic ambient soundscapes, the entire album is rooted in the guitars. “I enjoy trying to stretch the guitar as an instrument,” says Marquiss. “That reflects my playing style, always trying to make the guitar sound different, or create non-guitar like sounds.”

Marrying earthy, textural acoustic instrumentals that feel rooted in open landscapes, with those that capture the pulse and hum of a populated metropolis (Marquiss resides in Glasgow). The album was recorded in Aberdeenshire in Marquiss’ parents' garage. “Apart from the wind and the swallows nesting in the eaves there’s not many distractions around,” he says. This is a solo record that goes right to the very essence of Marquiss as an artist. The expansive yet intimate sounds he’s created here stem from the same peaceful isolation of where it all began.

There’s a cosmic touch tracing back to 1970s Germany (Michael Rother solo, Cluster, Harmonia, Popul Vuh soundtracks) that infiltrates much of the album, alongside some of its more pastoral textures, with Marquiss citing a wide range of listening habits. These include Bruce Langhorne's The Hired Hand, Jim O Rouke's Bad Timing, Arthur Russell and Laurie Spiegel.

Despite containing no lyrics, the album feels rooted in narrative and development. As the album unfolds the acoustic guitar becomes more prominent over the electric, almost as if nature is slowly taking back and growing over abandoned human-made structures. A record that, despite being experimental in tone and essence, retains a very human and natural touch throughout.