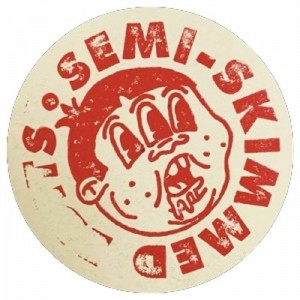 Third instalment of Semi Skimmed Edits from James Greenwood - the Manchester based DJ and editor and also one of the faces behind the long running and endlessly enjoyable Supernature Disco parties - which have frequented Albert Hall, The Carlton Club and Gorilla in their quest for glitterball decadence.

On side A we get a stylish cut-n-splice of uptempo boogie number "Something That You Got (Real Hot)" by Congress. A big spin one Full Beam! FM, nothing charges around the living room on a Sunday afters (no sleep till Monday) more than stream train of boogie.

"Find You"'s galvanized Strat chops, galloping B-line and huffing brass remind me countless moments of spiraling into the speaker stacks after one too many, but the original is escaping me right now! It's defo a more under-the-radar choice but nonetheless seductive and arresting.

Both cuts come in at the end of the tempo and energy spectrum and have that real, lost-in-the-smoke energy.