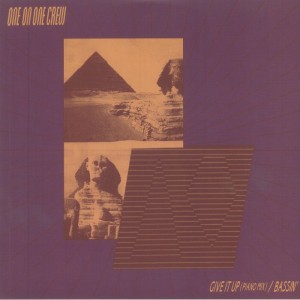 Record Label
Give It Up

Ridiculously rare & vintage UK house vibrations here, sourced and reissued by the intrepid cats at Rush Hour. One On One Crew are Leslie Lawrence & Danny Arno. They experimented with various styles and directions in the late 80s & early 90s with the aim of creating their own deep house sound. There are strong influences from Detroit and Chicago, but still with an unmistakable London style and identity. Nodding to the acid and bleep and hardcore sounds that were slowly moving their way up and down the country in those heady days of freedom.

Both tracks were produced in 1989, and this is the first time either are released on a full length 12". Benefiting from a bolstered remaster and sounding super clean and crisp - don't sleep on this one house heads!

Matt says: A truly classic and oft-overlooked slice of UK house music here given the specialist Rush Hour treatment. Crafted in '89 and guaranteed to rock ur club NOW!