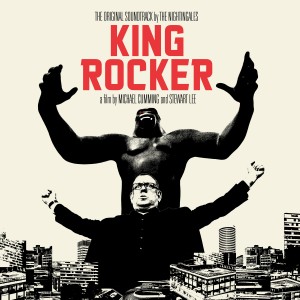 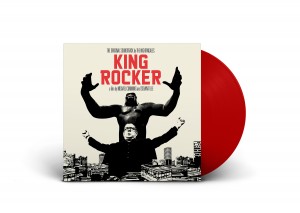 Comedian Stewart Lee and director Michael Cumming (Brass Eye, Toast Of London) investigate a missing piece of punk history. Robert Lloyd, best known for fronting cult Birmingham bands The Prefects and The Nightingales, has survived under the radar for over four decades. But how, if at all, does Robert want to be remembered? The anti-rockumentary ‘King Rocker’ weaves the story of Birmingham’s undervalued underdog autodidact into that of the city’s forgotten public sculpture of King Kong, eschewing the celebrity interview and archive-raid approach for a free-associating bricolage of Indian food, bewildered chefs, vegetable gardening, prescription medicines, pop stardom and pop art. All of the highlights from the film are here, along with rarities which won’t appear on any of the deluxe reissues of the Nightingales’ catalogue, among them 7″ versions of “Use Your Loaf”, the Bob Luman hit “Let’s Think About Living” and “Black Country”, a glam remix of crowd favourite “Thick And Thin” and a version of Christy & Emily’s “Ghost” which rivals the Nightingales’ take on TLC’s “Unpretty” for sheer beauty. The only act with roots in the punk era that have gone on to make records more captivating, cutting and entertaining today than at any point in their past; 2022 will be a busy year for the Nightingales, with months of live dates planned, a limited edition remix 12″, deluxe reissues of both ‘Hysterics’ and ‘In The Good Old Country Way’, and a hardcover book collecting Robert’s lyrics.

Barry says: A selection of brilliant Nightingales rarities and pieces from the film of the same name, written about Robert Lloyd of The Nightingales and The Prefects. A wonderful audio document in it's own right, and a perfect companion to a very funny film.