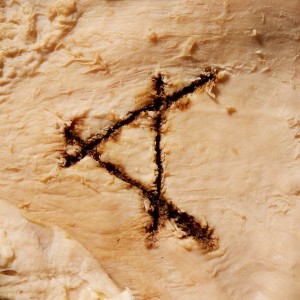 Tripe. It’s what graces the cover of Cassels’ third album, A Gut Feeling. It looks gross. And Cassels are a rock band who’ve often sounded gross. You know the adjectives. ‘Discordant’. ‘Angular’. ‘Cynical’. Shellac quickly mentioned. I’ve done it already, see?Listening to A Gut Feeling, though, Cassels sound different. Not too different – the molten riff of advance single ‘Mr Henderson Coughs’ puts paid to the idea that the London-based duo have taken a hard 180. But instead of writing as quickly as possible, riding the churn forced on DIY bands by an indifferent ecosystem, the Covid-19 pandemic gave the brothers Beck (Jim, guitar/vocals, and Loz, drums/BVs) some time to mull things over. Instead of sticking with the stripped-back recording approach of previous LPs, Jim and Loz spent time at Tom Hill’s Bookhouse Studios in South London, considering tone, layering tracks, and bringing new instruments into the fold.

Lyrically, the approach has changed too. Rather than presented as personal experience, Jim notes that his words this time around “are an intentionally muddy mix of experience, opinion, red herrings and fiction,” adding, “I found that setting myself the brief of writing character pieces offered a nice way of sneaking quite personal things into the songs without being explicitly autobiographical.” The result is the most satisfying and unexpected collection of songs in the Cassels catalogue. Instruments at turns razor-sharp and bludgeon-blunt provide the backing track to a savage, hilarious, and tender collection of short stories. Jim notes that “writing can be a great way of unearthing hang-ups and becoming acquainted with your own anxieties”. Hardly new ground for a rock band, but presented in this third person format – unbiased and filled to the brim with human warmth – these songs are more empathetic than anything the band have written before. You might have been Michael on his daily commute.

Perhaps you’re Sarah, or have a mum like her. And many of us will recognise ourselves in the heart-breaking ‘Family Visits Relative’. It’s clear that the band still aren’t afraid to tackle weighty subjects too, with A Gut Feeling picking up where their previous album, The Perfect Ending, left off. ‘Charlie Goes Skiing’ pulls a similar trick to Future of the Left’s ‘Goals in Slow Motion’ – setting a screed against consumerism to one of the most propulsive, catchy tracks on the record. It’s followed by ‘Dog Drops Bone’, a rustling loop overlaid with sad, simple chords reminiscent of a Sparklehorse tune, which uses the internal monologue of a beloved canine companion to question the true depth and sincerity of human relationships. This kicks into the breakneck ‘Beth’s Recurring Dream’ – a track exploring a sexual identity crisis which owes as much to early Los Campesinos! as it does Steve Albini. Of ‘Your Humble Narrator’, the album’s punishing, pulsing opener and A Gut Feeling’s thematic frame, Jim explains: “I liked the idea of introducing an unreliable narrator who frames the album as an exercise in manipulation for personal gain. When a person engages with a piece of art they are invariably being manipulated by the artist to some degree – that’s part of the fun. The artist aims to elicit some sort of emotional response, the audience buys into the conceit at the promise of experiencing some form of escape.” as listeners, we experience that manipulation first-hand on A Gut Feeling. But the fact Cassels have packaged it up as offal feels like another bleak wink. This is far from a stinking by-product, salvaged and sold to maximise profit. It’s nothing less than the most complete, relatable, and fully realised piece of art the duo has produced to date. Emotional response elicited. Conceit embraced. Escape gratefully achieved.

Barry says: At points arrhythmic and delightfully angular, heavy af and absolutely littered with a++ riffs, Cassels' 'Gut Feeling' is every bit the modern punk-rock monolith. At points hilariously obscure, before being brilliantly incisively candid and all above a roaring, jagged collection of time signatures and perfectly avant momentum. Very clever and VERY exciting.