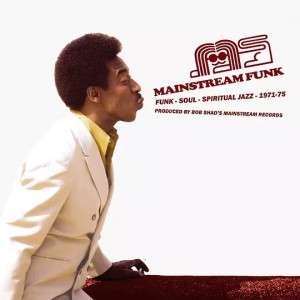 Wewantsounds continues its collaboration with Bob Shad's venerable jazz label Mainstream Records, and present a selection of 12 turntable friendly tracks recorded between 1971 and 1975 and showcasing the label's superb blend of Spiritual Jazz, Funk and Soul by the likes of Buddy Terry, Sarah Vaughan, LaMont Johnson and Johnny Coles

Most of the tracks are released on vinyl for the first time since their original release in the early 70s. The 2-LP set comes with gatefold sleeve featuring neverseen photos from the Mainstream vaults and new liner notes by UK journalist Paul Bowler.Mainstream Records is one of the key independent jazz labels of the early 70s, together with Flying Dutchman, Strata East, CTI and Black Jazz. Founded by legendary label man Bob Shad (who had been head of A&R at Mercury Records and set EmArcy in the 50s), the label concentrated on Psychedelia in the 60s before switching back to Shad's jazz roots in the early 70s, signing a new crop of jazzmen fed on John Coltrane and Miles' electric experiments. Thus was born the cult Mainstream "300 series" with its distinctive artwork and outstanding music from which this selection is largely drawn.

Giving a chance to many young jazz players and a few old friends, Shad recorded some of the most exciting jazz of the early 70s, mixing spiritual influences with funk and soul. Mainstream Records has a lot more exciting music in the vaults and 'Mainstream Funk' is just the tip of the iceberg serving as a timely reminder that Bob Shad's taste as a producer and A&R man was one of the finest on the scene.