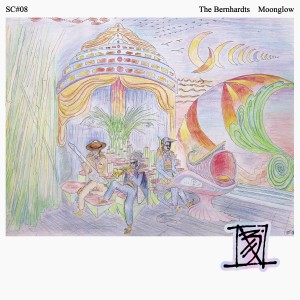 Arthur Russell meets The Style Council on this EP retrospective of lost Mancunian sophista-jazz-popoutfit, The Bernhardts.

The Bernhardts are Simon Milner (vocals, trumpet), Steve Hopkins (keyboards), and Neil Fitzpatrick (percussion, guitar), a trio that formed in Manchester in the early ‘80s. Simon and Neil have been good
friends since grade school, and before The Bernhardts, they released a few singles at the end of the ‘70s with their pop-rock outfit, The Smirks. On the side, the pair played regularly with their self-styled ‘jazzpunk’ ensemble at various local bars and venues. Steve was playing keyboards and producing music for Pauline Murray, John Cooper Clarke, and the Invisible Girls, and Manchester bands such as Jilted John, Dislocation Dance, the High, Chris Sievey, and Happy Mondays. He happened to attend one of Simon and Neil’s late evening punk-cabaret shows, captivated, he approached them about collaborating.

Stylishly laced in tuxedos, with their hair elaborately coiffed, the three played around Manchester as The Oscar Bernhardt Ensemble, a group dedicated to the romantic jazz nostalgia of the ‘20s, ‘30s, and ‘40s. By night, they transformed into Rio Fortune (Steve), Claude Walloon (Neil), and Oscar Bernhardt (Simon), conjuring yearning memories of a distant musical era. Away from their gigs, the trio assembled under various names for their studio experiments. They captured and updated the spirit of the decadent ‘20s as The Rum Babas, their interests in Eastern melodies saw them as The Rickshaw Gang, but ultimately, as all their influences spun together and the recordings developed, they simply went by The Bernhardts. Meddling around in the studio, they would add drum machines to some of their favorite jazz standards, giving an electronic tinge to classics like “I Get A Kick Out Of You” and “Moonglow”. The concept expanded into a fantasy that a 1930’s group had been abducted into outer space to run a cabaret in the stars; it was space-age meets sequencers. They crafted a handful of original songs that they felt were fit to shop around to labels.

The band got busy on the phone, posted out demo cassettes, and managed to set up some A&R meetups for a potential deal. It was a challenging experience to pitch their outer space voyage to less imaginative labels, but they landed a place on Parlophone with some determination. Together with producer Mike Howlett, they polished a handful of their songs in various studios around Manchester. This EP compilation contains released and unreleased songs from those sessions; a sampler of the different sides of The Bernhardts. Each song, intricately woven, paints the picture of the sophisticated celestial moods the group was trying to capture.

Although the group had radio play, played occasional promotional gigs, and had the backing of a major label, it was difficult for them to expand to a wider audience. The Bernhardts members eventually moved on to other projects a couple of years after their sole single, “I Hear You Calling”, was released. They shifted focus slightly, playing together as Distant Cousins along with Simon’s wife Doreen whom he’d met during The Bernhardts’ recording sessions. Currently, the group still maintains good friendships and strong interests in music. Neil plays indie-pop with his daughter Hann, Simon can be found busking regularly around Manchester with The Charleston Charlies, and Steve has returned to running a Latin-soul-jazz quintet after taking a detour to earn his Ph.D in laser physics.

Matt says: Jubilant and sincere, arty indie pop which sounds like Arthur Russell meets Orange Juice in the Talking Heads studio. It's fun, musical, heartfelt and another chapter of rainy city music you're probably not aware of yet. Mega!