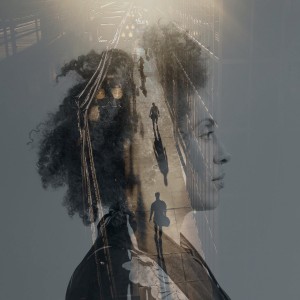 'Forever I Wait' is Topley-Bird’s fourth long awaited studio album and her very first self-produced and curated piece of work to date. The album, was released digitally on September 10th 2021 with a special “marble” vinyl edition, available to pre-order now, capturing an extensive journey confronting, exploring, analysing and reflecting on the devastating fragilities of life as it ultimately seeks to make peace with what life is.

A sentient and sensual presence framed Tricky’s trip-hop pioneering white label debut release, Aftermath. Hauntingly unique and immediately recognisable, that voice became the defining timbre of a new music movement. Behind this voice was mysteriously soft-spoken, London-born Martina Topley-Bird, whose exquisite voice came to inspire and infuse other pioneering artists across all genres.

“It’s a trip through different emotional states and frequencies, mostly dark, from insecurity and desire, all the way through to serenity and acceptance with themes that resonate from my young teens all the way through till today. Things that I’ve seen and things I’ve felt and worked through, although sometimes I sense them trying to return”

“Forever I Wait”, as the title alludes, was written and re-written over a long period of time.

“I had to change my way of relating to music and the music industry in order to make the record I wanted to make.…and that took time. And I took the time I needed. I started in London, moved and lived in America for the first time in my life, then briefly moved back to London and finished the record in Spain.”

“After trying to work on a new record for a couple of years, I came to a realisation that in order to move forward I had to separate the concept and vision I had for this record from me as a person. I had to shift my perspective. That was a big personal win and the beginning of “Forever I Wait.”

'Forever I Wait' leans on a multitude of tense sounds, dubby atmospherics and natural instrumentation to demand the listeners attention leading to over two decades of observations, experiences and musical sacrifices. It is a bi-product of the new perspective featuring carefully selected and tailored supporting arrangements from a handful of collaborators including Robert del Naja (Massive Attack), Rich Morel (Deep Dish), Christoffer Berg (Fever Ray) and Benjamin Boeldt (Adventure).

A truthful expression of desire and heartache “Forever I Wait “Is Topley Bird’s most precise and accurate album to date.