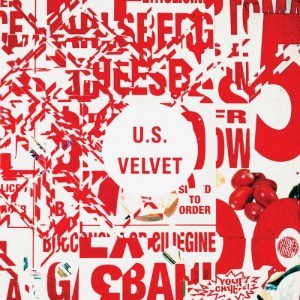 ‘U.S. Velvet’ is the debut release from the LAbased duo of the same name, made up of Zahara Jaime and Collin Davis. Their debut single is a raw, post-punk mission statement about the anxieties of living in the 21st Century.  The 12” single includes an instrumental version (exclusive to the 12”) and a dub version by ATOsigned artist, Pachyman.

Collin is currently an engineer and producer at Stones Throw Studios in Los Angeles and Zahara is a touring musician with The Simps and Eyedress. Zahara and Collin both create solo music as Zzzahara and Ynes Mon respectively. The duo will release a video to accompany their ‘U.S. Velvet’ single, which features a cameo from Stones Throw’s founder Peanut Butter Wolf’s alter ego, Folerio.

Dub version of the single by Pachyman, who just released his new album ‘The Return of…’ with ATO Records and opened two shows for Khruangbin.