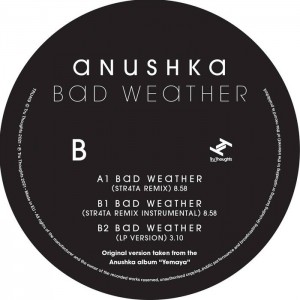 The 12” will be released on limited 500 press DJ promo style vinyl and features the STR4TA remix, STR4TA remix instrumental and original album track. Taken from the band’s LP ‘Yemaya’ – named after the Goddess of the Sea, protector of women and the Eternal Mother in the Santeria/Yoruba religion – the original of “Bad Weather” was inspired by the life-giving essence of water, referencing the guidance and support Yemaya offers her children, helping them to grow. Transforming the track with their iconic Brit-funk style, Gilles Peterson and JeanPaul “Bluey” Maunick AKA STR4TA immerse Anushka’s vocals in a dancefoor groove tinged with explorative electronic melodies and lively instrumentation. “Bad Weather (STR4TA Remix)” is thefrst exclusive remix from STR4TA following the release of their album ‘Aspects’ which saw support pour in from the likes of The Guardian, Jazz FM, Mixmag, The Independent, Echoes, BBC 6Music and Clash Magazine.