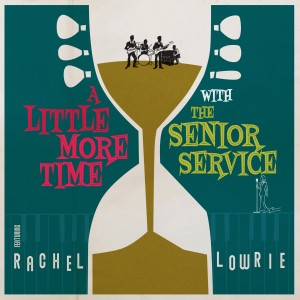 The Senior Service returns with a brand new 10” for 2022. A year or so ago, The Senior Service decided that it wanted to add a little more to its well-honed instrumental sound. On one slightly drunken night out, they approached local songwriter and chanteuse Rachel Lowrie and asked if she’d like to perform guest vocals on some specially written new material. By this time, Rachel had supplied impressive ‘pipework’ on quite a few Medway records so the band was confident that she’d be able to deliver – the band was right. Following a lengthy hiatus in activity due to lockdown restrictions, The Senior Service was finally able to get together to record the new songs, so they piled into Ranscombe Studios to crack on. It soon became apparent that they’d lost none of the chemistry that had made them such a powerful musical collective and the instrumental backing tracks were laid down with relative ease.

It was when Rachel arrived and sprinkled vocal sugar over the tracks that they really began to shine! Intuitively, she understood the approach needed and delivered a made-to-measure performance for each song. this collection includes four original tracks penned by the band plus two rollicking covers of lesser-known instrumentals; John Schroeder’s take on ‘Lovin’ You Girl’ – a slinky slice of lounge grooviness, given a slightly chunkier sound, informed by the band’s musical aesthetic, and ‘Mysterious Land’ – The Chris Lamb Orchestra’s little heard filmic masterpiece; a track seemingly tailor-made for the band to get its musical chops around. So, we invite you to spend ‘A Little More Time with The Senior Service’