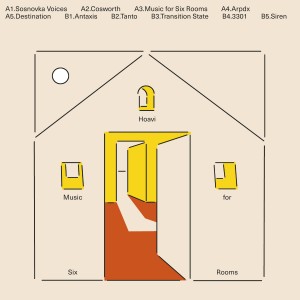 Compiled during a fruitful interchange between label and artist, “Music for Six Rooms” has been culled down from a huge selection of tracks, its disparate moods distilled into 10 profoundly immersive tracks that touch upon dream pop, dub techno, and new age, all swirled together into the headiest of ambient dreamscapes.

Active since the early 2010s, when he founded his Shells Rattle label, Hoavi has released on a number of labels including floe, Snare Tapes, Fauxpas, and Minor Notes. “Invariant”, released on his own label, Peak Oil has suffered the wrath of the Great Pressing Plant Scandal of 2021, and is only just surfacing now, after being recorded in 2019! We think that, along with this what you’ve got in your hands (or on your browser) offers a wonderfully complementary view of Hoavi’s talents - one rhythmic, the other largely beatless, yet both of them sensuous in the extreme. Hoavi is an artist to get immersed and obsessed with – we hope you enjoy “Music For Six Rooms” as much as we do!