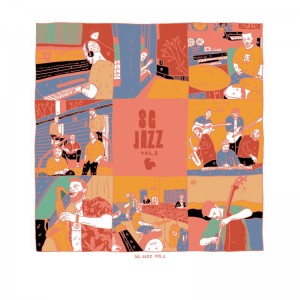 With SGJAZZ, Dundiff pursues his passion for jazz. SG stands for supergroup. The quintet plays jazz with a hip-hop state of mind. Classically trained jazz musicians – multi-instrumentalist Idris Frederick, Patrick Denney on bass, Anthony Keenan on guitar, Noah Reed on alto and tenor saxophone – are jamming with certified rap cats. SGJAZZ are not a random group of session players but five long-time friends who go way back.

Their first album SGJAZZ Vol.1 was released on Jakarta Records, for their new project, SGJAZZ have signed with Melting Pot Music. On SGJAZZ Vol. 2, they are putting their idea of forward thinking and headstrong jazz into action without neglecting the groove. Not unlike Kokoroko (UK), Surprise Chief (Australia), Athletic Progression (Denmark), Butcher Brown (USA) or Fazer (Germany). The album & singles artwork has been created by Parisian illustrator MC Blue Matter.

Dr. Dundiff (Done Different) is a heavyweight on the instrumental beats/lofi scene with a keen ear for samples, sounds and rhythms and releases on labels like Jakarta, Hip Dozer, PLYGRND and Cold Busted. He is also one half of alt R&B duo Otis Jr. & Dr. Dundiff.

Idris Frederick is a multi-instrumentalist and composer who was born in Detroit, Michigan but was musically raised in Louisville. Before moving to New York to study at The New School of Jazz, he spent the first six years of his career performing alongside some of the biggest talents in and around the Louisville area.

Patrick Denney is a multi-instrumentalist born and raised in Kentucky. Performing professionally as a bassist, Patrick plays in many bands and projects across a wide span of genres. When not performing, he teaches guitar and bass, and records bass as a studio musician.

Noah Reed is a saxophonist and composer from Columbus, Ohio. Most of his performing career has been in Louisville, where he received an undergraduate degree in jazz studies and a master's degree in jazz performance. Throughout his career he has worked internationally as a cruise ship musician and a music teacher in Queens, New York.

Anthony Keenan is a Louisville based session guitar player and songwriter who has been collaborating with artists from Indie, Hip-Hop, country, R&B and Jazz worlds respectively for nearly a decade. The only member of the group who hasn't pursued a formal education in music, Keenan studied psychology and continues to hone his sound with help of an eclectic and inclusive local art scene.

Millie says: Lo-fi Jazzy beats create the ultimate chill album with hip hop influence. Amazing what the coming together of a group of friends who are talented musicians can make! And housed in a lovely cover which is a bonus.