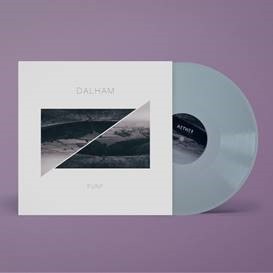 For the first time, Jon Michaelides allows his Dalham project more space to breathe in two new long tracks of sky-scraping, world building ambient (or is it) techno.

Dalham is the long term of project of Suffolk born Londoner, Jon Michaelides.
Here he discusses “Fünf” (his fifth release, natch), which is subtitled “The Past Is a Foreign Country”: “There have always been “ambient” tracks on previous albums but they have in some ways served as a bit of peace and respite from the more busy percussive tracks. The purchase of some effects units triggered the decision to use delays and reverbs during the composition process much more and an entirely ambient record seemed the best vehicle for this. I was simultaneously attempting, and not for the first time, to fully grasp the concept of special relativity and so a record about time and space, focussed on the manipulation of time (delay) and space (reverb) was born.

“Some of the phenomena associated with this theory, for example the relativity of simultaneity, lead to the questioning of the nature of reality and at times a sense of disconnect with much of what was happening in the concrete world. Coupled with the desire to revisit the past, where certain friends and family are still alive and well, this set the emotional tone for these two extended tracks. Fünf is a journey to acceptance. Not only is the past a foreign country, but our passports have been revoked and we won’t be returning.”

It’s interesting that Jon uses the term “ambient”: ”I guess I call it ambient because it doesn’t have any ‘beats’ but yes, it is still very rhythmic.”

For many, these compositions will sound too intricate and complex to be termed “ambient”, but as ever, we find it difficult to find the words to describe the unique music that Jon makes. A true individual, there is literally nobody else that sounds like Dalham.