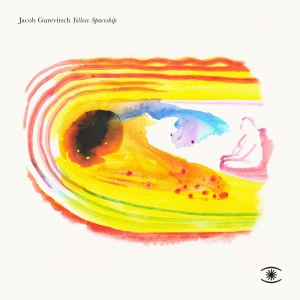 At the heart of Jacob Gurevitsch's latest album is a desire for collaboration, and with Spanish Grammy nominated singer Buika, and Danish chanteuse Alice Carreiri at the helm, the Danish guitarist delivers, with his third album Yellow Spaceship.

Rich in cross cultural flows, dipping into flamenco and bolero, jazz and with flourishes of Italian and French soundtrack motifs, Jacob has laced together 10 sublime tracks whilst unleashing his impressive Spanish guitar skills, a craft which begun in his late twenties, complimenting his soul, jazz and funk grounding, instilled as a young, gigging guitarist.

Phenomenally, Jacob has built a mammoth fanbase online with his streaming track counter reading at over 100 million in part due to the roaring success of his previous long player, Lovers in Paris, also released on Danish label, Music for Dreams. It was back in 2014 when his title track from said album was remixed without permission and gained large traction on the radio dials in Ibiza that kickstarted an association with the vibe of Ibiza and chill out music whilst picking up a legion of DJ fans like the legendary Ibizan DJ Alfredo. His second album In Search of Lost Time came out in September 2019, further stripped back and acoustic than his prior and that paved the way for Yellow Spaceship.

Residing in Copenhagen, Jacob has a litany of cultural paths that have led him back to Denmark, having travelled plenty and spent much time living and learning in both Buenos Aires and Rio De Janeiro. The bulk of the recordings on Yellow Spaceship took place in Denmark but Jacob's creative hideout in Palma, Mallorca has been integral to his songwriting process. And it is Majorca where Buika, the flamenco singer with attitude who takes the vocal reins in Melancolía, originally comes from. The song drips with emotion, an exploration of love and beauty and a recourse for painful times. Danes are known for their tendency towards melancholy, although here, the grey Nordic despondency makes way for a kind of poetic wallowing that compliments the Spanish guitar and singing. The song also represents a massive turning point in Jacob’s life after a great friend passed, a movement in which appreciation of people and things became the key to life. It was at the funeral of his friend he heard a perfectly poetic make-believe about how his beloved pal had taken off into the sky in a 'Yellow Spaceship' with an errand to spread his charisma.