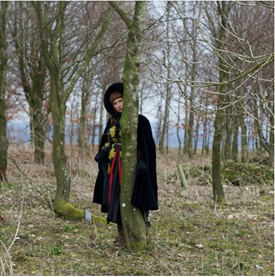 Stunning and evocative psych folk album from the Lewes based group. There are shades of Sandy Denny, Trees, Mellow Candle and the Wicker Man, shot through a kaleidoscopic lens. Beautiful tones abound from singer Rachel Thomas, backed by Stuart Carter (Fumaca Preta) and writer/producer Richard Norris (The Grid/Beyond The Wizards Sleeve).

The Order of The 12 is a psych folk group formed in Lewes, Sussex. It is a place of rolling hills, druids, and sorcery. There’s also a long folk tradition here, from the Copper Family to Shirley Collins, who lives just round the corner from where this album was created. It was recorded in an attic studio on the banks of Lewes Castle.

The Order of The 12 is singer Rachel Thomas, Fumaca Preta multi-instrumentalist Stuart Carter, and musician, writer and producer Richard Norris (the Grid/Beyond The Wizards Sleeve).

The album is a richly melodic set of tales of lost love, pagan magic and the lore of nature. There’s a strong sense of the rolling countryside in the music, and it’s connection with those who live within its hills. Echoes of Sandy Denny, Trees, Mellow Candle, and all manner of psych folk soundtrack from the Wicker Man onwards are evoked in its rich sonic brew.