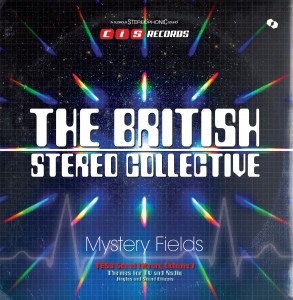 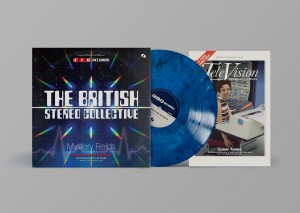 Phil Heeks delivers a stunning homage to ‘70s BBC LPs and vintage soundtrack compilations in this debut record from The British Stereo Collective.

Although the Mystery Fields album cover has the look and feel of a BBC Radiophonic Workshop release, the album itself is a wider nod to various TV theme compilations that Phil grew up with in the 1970s and early 1980s, including the classic Geoff Love releases and the BBC themes and sound effects albums. What comes across most is the love and affection for the period, beautifully recreated in the meticulous detail of the album artwork and the effortless precision with which the tracks are put together and sequenced.

Says Phil, “After revisiting the 1979 conclusion to the Quatermass saga on Blu Ray in October 2019, I was hugely inspired by the music and atmosphere and embarked on creating a specific brand of retro electronica under the guise of “The British Stereo Collective”.

Pressed up on beautiful Mystery Blue vinyl and featuring a radio Times referencing insert, the album works as a complete and aesthetically gorgeous time capsule for those who are perennially nostalgic for the golden age of Sunday afternoon TV and your uncle’s Vangelis and Hi-Fi stereo albums.