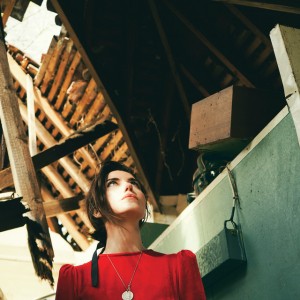 Laura-Mary Carter, best known as one half of rockers Blood Red Shoes, will make her solo debut this December with the release of mini-album, Town Called Nothing.

A much quieter and more contemplative sound than her usual guitar-shredding anthems, Town Called Nothing was written in between tours at various sublets and studios in the UK and Los Angeles.

"I found a beat up acoustic guitar and without thinking about it songs just started to come to me," she shares."The idea of writing on an acoustic guitar was new to me, I’d always written songs for my band which has a very heavy disposition. I realised that writing in this intimate way exposed my voice and changed the way I was writing and singing lyrics."

The record was produced by Ed Harcourt at RAK studios, UK, who also played bass and piano, plusJorma Vik (The Bronx, Eagles Of Death Metal) on drums.

This sense of displacement is at the core of Laura-Mary’s story and right at the core of her debut solo release “Town Called Nothing”. During a break from touring, she relocated to Los Angeles, continuing her lifelong tradition of constantly moving around. “Nobody ever knows where I live," she sighs, “it’s like a running joke with my friends."

Even whilst in LA, she didn’t sit still. Moving around between different air’n’b sublets as she kept extending her stay, she landed in a rickety place which by chance had a battered acoustic guitar on the wall, with a couple of missing strings. “It was just me, alone, and I couldn’t write songs the usual way because I didn’t have volume and distortion. Plus the only thing you could use that guitar for was really traditional chords, everything else was out of tune."

The collection of songs on Town Called Nothing were written in this time, then recorded, of course, in not one but in multiple studios, across both the USA and the UK. It shows a yearning, mournful, Americana-tinged and introspective side of the artist, with her voice allowed more space than ever before to really dominant and shape the narrative. “It’s about desolation and abandonment really,” she confirms. “And that fear of being left to go derelict, just like those old towns.”

It’s that fear which pushes people back to places even when they know there’s no reason. Just as the artist herself says, “I kept going back to the town called Nothing, because the sign said ‘population: 2’, and I wanted to know if anyone was really there. But there wasn’t. It was always just me by myself.”