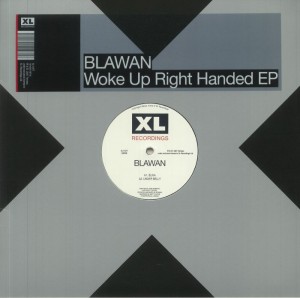 A rightly hyped new EP from modern techno demigod Blawan, "Woke Up Right Handed" has been deservedly tipped as one of the best dance 12"s of 2021. Released via XL, who have clearly spotted the gigantic ascent of this rising superstar; it definitely ranks as one of Blawan's best set of productions to date.

Cloaked in a rugged metallic armor, Blawan's punishing modular set-up has always been known to exert aggression, but here we see that aggression carefully tamed into something more surgical, able to penetrate deep into our body and mind spaces without leaving so much as a scar.

"Under Belly" steam trains on, barely keeping on the tracks as its heavy cargo spills from side to side: a sheer nightclub juggernaut that can carry any session forward.

"Close The Cycle" on side B recalls the glitchy-IDM side of Radioactive Man but with added spicy heartburn while "Gonk" unpacks one of those heavy clangers synonymous with this producer's library. "No Rabbit No Life", continues Blawan's tradition of silly track names; concluding this beast of a 12" with a modular expression of half-tempo DnB and sci-fi breaks. Effortless striding ahead of the pack and into the record boxes of the elite bass technicians.

Miss this one at your peril folks!

Matt says: Incredible, bone-splitting production on this new from Barnsley's modular techno maniac - Blawan. Ripping cyborgs a new one since 2011; the release marks a new, high watermark for this innovative and genre-pushing talent.