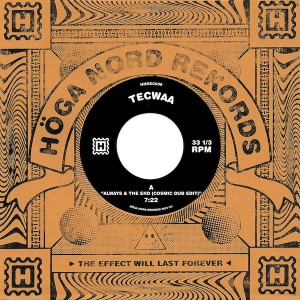 Tecwaa is no newcomer in the Höga Nord-roster. He has already made two appearances on the label with an album and a single. This, his third release on the label is another 7” containing pure, high quality molusc chug™ and opiated dark disco. .

The sound in Tecwaa’s music might be explained partly by his geographic position. Being based in York the sound is not as predictable as it might have been if the music was produced in one of the country’s larger cities. It holds a lot of influences found in, say Manchester and London, but still the music holds a contrasting quality with equal parts of freedom and melancholy resounding in the tracks. And the result is unique and beautiful: Airy and free-floating piano drills, dub effects from space and ghost-choruses recorded from secret rooms inside York’s Minister give the electronic sound an organic feel. The melancholy is more of an eerie feeling hiding beneath it all.

A. Always & The End (Cosmic Dub Edit)
B. Those Collective Dreams