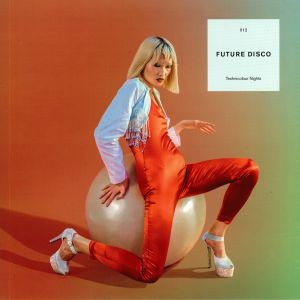 Welcome to the Future Disco. A technicolour space where you let your senses run free and immerse yourself in a nocturnal journey of musical discovery. Every collection is inspired by the past, but perfectly curated for tomorrow's dance-floor - this is disco’s future.

It’s been ten years since Future Disco arrived with the seminal first edition ‘A Guide To 21st Century Disco’. Since then they have gone on to release over 20 albums and countless worldwide parties and radio shows. So to celebrate ten years in the Disco forefront Future Disco have provided a new artistic direction alongside a brand new album in the series.

While the outside may have changed the inside is exactly the same. An eclectic selection recapitulating the sound of today and tomorrow, with firm nod to the past. Future Disco has always managed to weave that line of interesting and party starting and on this album, it’s no different. Disco has always been about uniting the dance-floor and Future Disco embody this spirit with a cross selection of sounds and artists.

They find plenty of future rising stars with New Zealand’s Flamingo Pier and Paris’s Yuksek all comfortably sitting alongside more established names such as Jamie Jones, who reworks the legendary Teddy Pendergrass, Metro Area’s Darshan Jesrani and the original destroyer of Rock and Roll, Mylo.

There’s plenty of exclusives on this album. One exclusive coming from superstar dance producer Mylo, one from cult hero Kiwi and a Future Disco edit from head compiler Sean Brosnan. It also see’s a number of tracks being pressed to vinyl for the very first time including the aforementioned Jamie Jones remix of Teddy Pendergrass, Galaxians, The Funk Hunters and Bertrand Burgalat.

The entire mixed album has as always been edited and mixed for dancing pleasure. For the first time the album will be available as a heavyweight limited vinyl edition, with 300x limited edition pressed to pearl white.