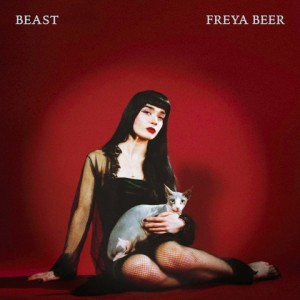 “Don’t tell me this is wrong to enjoy all these feelings”, Freya purrs with a lip-smacking sense of relish. A song all about the conflicting feelings that can shadow a sense of empowerment, “Beast” finds Freya stepping into the shoes of Lady Justice and taking the scales into her own hands. Laden with the typically evocative imagery we have come to expect from the London songwriter, its lyrics toy with our notions of lust and love, guilt and the truth, the milk of human kindness and the poison of power; to create something exhilarating and asphyxiating in equal measures. Produced by Peter Hobbs (The Boy Least Likely To), it’s a track of unrelenting intensity that locks the listener with clenched jaws from the outset. As its spiralling arrangements hypnotise and Owain Hanford’s prowling percussives paralyse, its Freya who delivers the deathly sting in the tail with puncturing guitar barbs that will spare no-one in their path.


The latest in a string of captivating singles, “Beast” follows previous cuts “Siren” and “Calm Before The Storm”; each paving the way for one of 2021’s most anticipated new releases from one of its most defiantly uncompromising new talents. Freya Beer has earned a reputation for music that mixes poetic lyrics inspired by Charles Bukowski or Anne Sexton, with the distinctive gothic stylings of Nick Cave, Johnny Cash, or David Lynch. Highly literate in her reference points both musical and written, they shine no greater than on the obsidian sheen of her bewitching debut album: ‘Beast’. Unphased by the isolating impositions of the previous year, Freya used the period’s foreboding limitations as a means to feed her art and blossom as an artist. Using her time away from the live stage to connect with her creative impulses on a deeper level, she began to nurture and raise the debut album she had always wanted to make. Delving into the aspirations of the dreaming to the lucid nightmares of the living, the songs of ‘Beast’ find Freya blurring fiction and reality with a disorienting daze. Scouring the silver screen for nuanced narratives, many of the songs of ‘Beast’ glean initial inspiration from characters seen in classic cinema. Distorting their stories and injecting traits of her own volition, their journeys soon become very different prospects