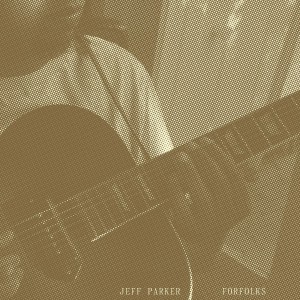 Jeff Parker’s Forfolks — a new album of solo guitar works — was recorded by Graeme Gibson at Sholo Studio in Altadena, California (aka Jeff’s house) over two days in June 2021. It includes interpretations of Thelonious Monk’s “Ugly Beauty” and the standard “My Ideal,” plus six original compositions including "Four Folks," "La Jetée" (a tune he recorded with Tortoise in 1998), and four totally new loop-driven, stratiform works that marry melodic improvisation with electronic textures.

“It's a particular thing to hear Jeff play solo,” writes veteran Chicago musician and longtime Parker collaborator Matthew Lux in his liner notes for Forfolks. “He is an unusually selfless improviser, oftentimes laying out and highlighting the contributions of his band mates… On this recording, however, he is by himself, joined only by his own ideas, looped or frozen, to flesh out the music he's creating in his mind. Hearing him craft entire sound worlds on these eight selections gives us an opportunity to really see how Parker orders sound.”

Forfolks follows Parker’s critically acclaimed 2020 record Suite for Max Brown, which Pitchfork called an “effortlessly detailed album, full of tradition and experimentation that spans generations … It lives at the vanguard of new jazz music.” The album went on to debut at No. 1 on Billboard's Current Contemporary Jazz Chart.