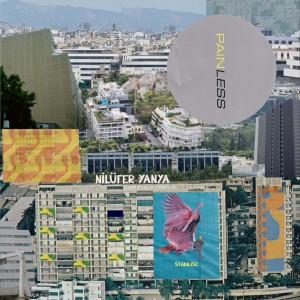 Painless is the follow-up to Nilüfer Yanya’s renowned 2019 debut album Miss Universe, which fully established her as a singular artist and a distinctive voice that simply has to be heard. The critically acclaimed Miss Universe - a widescreen concept record that took a tongue in cheek swipe at the most self-involved corners of the health and wellness industry - was followed last year by the three song EP Feeling Lucky?, which further explored Yanya’s fascination with ‘90s alt-rock melodies and drew on themes of resentment, her fear of flying, and the concept of luck. Pitchfork summed up Feeling Lucky? and her now peerless songwriting aptitude best: “Nilüfer Yanya’s melodies have a pull so strong they almost necessitate their own law of physics.” Yanya also re-released her early EPs on vinyl for the first time this year on the record Inside Out. The release is a fundraiser for Artists in Transit, a collaborative not for profit group she founded with her sister Molly that delivers art workshops to displaced people and communities in times of hardship.

As the daughter of two visual artists (her Irish-Barbadian mother is a textile designer and her Turkish-born father’s work is exhibited at the British Museum) creativity was always destined for Nilüfer Yanya’s future. Now she enters the next stage of her creative journey, Yanya is running head first into the depths of emotional vulnerability on her sophomore record Painless. The album was recorded between a basement studio in Stoke Newington and Riverfish Music in Penzance with Miss Universe collaborator and producer Wilma Archer, DEEK Recordings founder Bullion, Big Thief producer Andrew Sarlo, and musician Jazzi Bobbi.

Where Miss Universe stretched musical boundaries to include a litany of styles from smooth jazz melodies to radio ready pop, Painless takes a more direct sonic approach. By narrowing down her previously broad palette to a handful of robust ideas that revolve around melancholy harmonies and looped industrial beats to mimic the insular focus of the lyrics, Yanya has smoothed out the idiosyncrasies of previous releases without losing what is essential to her.

Painless is a record that forces the listener to sit with the discomfort that accompanies so many of life’s biggest challenges whether it be relationship breakdowns, coping with loneliness, or the search for our inner self. “It's a record about emotion,” Yanya explains. “I think it's more open about that in a way that Miss Universe wasn't because there's so many cloaks and sleeves with the concept I built around it.” She adds, summing up the ethos of the new album, “I'm not as scared to admit my feelings”.

Barry says: Poppy melodies, clashing percussion and Yanya's unmistakeable voice weave around each-other, sometimes hinting at the vocal rhythms of R&B, but much more akin to a stylistic mix of electronic indie and scattered art-rock.