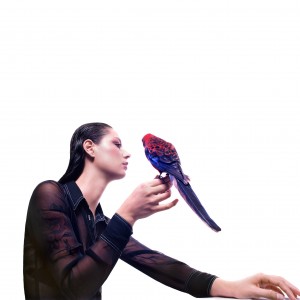 Grace Cummings is an actor and musician from Melbourne, Australia.Grace learned piano as a child and took up the guitar as a young adult, but only began to write and perform music in 2018.

She went from a debut gig at Melbourne’s Old Bar to a breakthrough performance at Boogie Festival in the space of six months, pickingup support slots with J Mascis and Evan Dando along the way. With buzz building around her powerhouse live show, Grace grabbed the attention of Flightless Records (King Gizzard and The Lizard Wizard), who released her debut album, Refuge Cove, in late 2019.

Refuge Cove won praise from publications around the world, including Pitchfork and All Music, and Grace was tapped for support slots with Weyes Blood, Cash Savage, Teskey Brothers and Allah-Lahs. In 2020, Grace recorded the single Sweet Matilda for Mexican Summer’s Through the Looking Glass series before landing a worldwide deal with indie powerhouse ATO Records (Alabama Shakes, My Morning Jacket, King Gizzard and the Lizard Wizard) and a distribution deal with Caroline Australia.

Her sophomore album, Storm Queen, is set for release early in 2022.

Barry says: Part way between widescreen Americana or electric country and soulful lounge music, Grace Cummings presents a distinctive and evocative suite both confident and athletic. Her vocals shine with emotion and skilfully dominate the beautifully laid backdrop. An exciting and bracing journey.