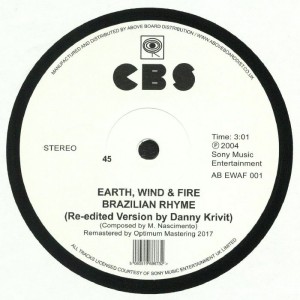 Danny Krivit's officially sanctioned re-edits of Earth Wind & Fire's "Brazilian Rhyme" and "Runnin" have been sought-after since they first appeared on a Japan-only 12" back in 2004. In fact, such is demand that even later bootleg pressings now go for silly money online. As this reissue proves, though, they're arguably amongst Krivit's strongest scalpel works. Certainly, his three-minute revision of the always too short "Brazilian Rhyme" teases it out to just the right length, in the process delivering a sweltering, sing-along summer anthem. The flipside revision of the equally as summery "Runnin" is every bit as good, with Krivit making merry with the original's life-affirming scat vocals and killer piano solos.

Martin says: Everyone knows the hook off "Brazilian Rhyme". But the original's short length always scuppered it on the dancefloor. Remix supremo Danny Krivit does what we all want and extended this slick summer groove out over 8+ mins for maximum dancefloor enjoyment.