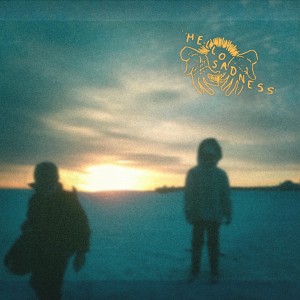 Hello Sadness is Los Campesinos! shooting for a pop album. Not pop-punk, not indie-pop – punchy, pristine pop. But as with everything in life, nothing ever quite goes to plan.

But by the title track, the bravado evaporates and from there on out, Hello Sadness might be the most gut wrenching, emotionally devastating album the group has ever produced - quite a feat considering the rest of their catalogue.

Recorded back in 2011, just outside of Figueres, Catalonia, and their first with new members Kim, Jason and Rob, it's an album of break ups, body parts and football. An album that finds bandleader Gareth cracking while the band around him play more frantically, more powerfully than they ever had before. It’s an album that, ten years ago, cemented Los Camp!’s position as més que un band.

Hello Sadness is the album that made you a 4lyfer. The rawness and brutal honesty that spilled out felt like an invitation to join the band itself, or at least some broken hearts support group. In current times, the effort and drive the band put into furthering progressive politics, inclusivity and DIY spirit has always been mirrored by their fans, the feeling of collective effort uniting waifs and strays worldwide to create thriving scenes, collectives, venues, bands and zines.

But LC! aren't about to give up the good fight, and that the reissuing of Hello Sadness comes on the band’s own Heart Swells label is a reaffirmation of their commitment to being DIY till they Die. And maybe it is their pop album – John Goodmanson’s production is crisp and cutting, Jason Campesinos!’s drumming adding a controlled intensity to Tom Campesinos!’ luscious compositions – but nothing for Los Campesinos! will ever be that straightforward.

Since its original release the band's membership has changed, beloved venues have closed, we are all far older and more jaded. But Hello Sadness still hurts. ‘The Black Bird, The Dark Slope’ swirls desperately, ‘Every Defeat a Divorce (Three Lions)’ serves as a reminder of the dust gathering thicker in the England men's football team’s trophy cabinet, and we, Los Campesinos!’s ‘sad eyed children’, still hang on their every word.