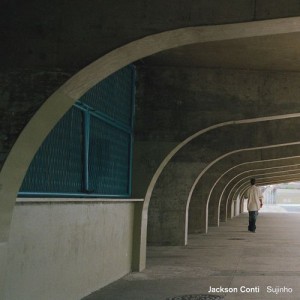 
Madlib Invazion reissues Madlib’s collaboration with legendary Brazilian drummer Ivan “Mamao” Conti, propellant for lauded jazz fusion archetypes Azymuth. 5000 pressed for worldwide. Debuts on Black Friday. First released in 2008 on CD by the US based Mochilla imprint with vinyl being issued only in Europe on the Kindered Sprits label. Both formats are out of print with vinyl unavailble since its initial run. Alternate cover artwork, photography by B+.

When Madlib went to Brazil in 2002 with Mochilla to participate in the production of Brasilintime his one mission was to meet Ivan “Mamao” Conti the drummer of the legendary trio Azymuth. Madlib had made an Azymuth tribute record he wanted to play for him. On a rainy night in Rio Mamao and Madlib went in the studio. Several hours later the rhythm tracks that make up Sujinho were laid and the process began. Featuring the music of Madlib, Mamao, Edu Lobo, Chico Buarque de Hollanda, Luiz Eca, Baden Powell, Vinicius De Moraes, Marcos Valle, Joao Donato, Dom Um Romao, Airto Moreira and even George Duke… and with guest vocals by Thalma De Freitas — Jackson Conti is a unique and classic record. Filled with the angularity and edge of a Madlib production and underwritten by the polyrhythmics of Mamao — Sujinho takes Brazilian music into places it has never been, bringing oft forgotten classics like Upa Neguinho to 21st century ears.