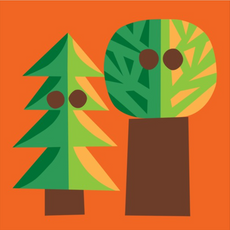 Cosmic Neighbourhood is the brainchild of Adam Higton, an artist, illustrator and musician based in North Yorkshire. Through a combination of collage, drawing, textiles and music, the work he makes is an ongoing documentation of the daily goings on of the Cosmic Neighbourhood – a mythical and mystical suburb where trees talk and leaves dance. Adam recently created a set of stunning new visuals and branding for Caught by the River.

The Trees EP is a dizzy collection of monocultural melodies all captured in a place where old growth analogue drones burrow down into the earth and the wispy riffs from rock hewn synthesisers reach towards the sky. It is the sound of the BBC Radiophonic Workshop being plugged in after being left out in the elements for a season or two; an all-natural psychedelic voyage into the beating heart of the British countryside.

Matt says: Dazzling, technicoloured new psychedelia here - authentic as you like! Driving by organ and fuelled by California Sunshine - take a trip on a magic carpet with Cosmic Neighbourhood, there ain't no going baaaackk maaaannnnn!!

Touch The Sky
Fir Hat
Swaying
Power To The Leaves