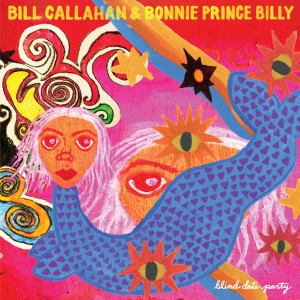 The Blind Date Party hosted by Bill Callahan and Bonnie ‘Prince’ Billy and featuring AZITA, Matt Sweeney, Alasdair Roberts, Matt Kinsey, Sean O’Hagan, Bill MacKay, George Xylouris, Dead Rider, David Pajo, Mick Turner, Meg Baird, Ty Segall, Emmett Kelly, Cory Hanson, Six Organs of Admittance, David Grubbs, Cassie Berman, Cooper Crain and Sir Richard Bishop happened online in the fall and winter of ’20–’21 — but the party planning dated back to the spring of 2020. Stuck at home, with no gigs in the foreseeable future, Bill, Bonnie and Drag City needed an outreach program to keep themselves busy, not to mention sane. In the absence of any company or anything on the calendar, playing songs they loved was an idea; playing with people they loved, the desire. And making it fun — so pairing someone with someone else having no say in the matter, the essence of the blind date, was the plan. Favorite songs were chose; players from around the Drag City galaxy were messaged. Pretty soon, songs were flying back and forth — music in the air!

And thus, they were entertained throughout the summer of 2020, when so much else in the world seemed so completely wrong. By the fall, the songs started to appear online: Bill and Bonnie singing a song by someone they loved and admired; each song cut by another another artist they loved and admired, then sent to Bill and Bonny to provide the finishing touches. The spotlight pointed in every direction each week: toward the singers and writers who’d originally played the songs (Yusuf Islam, Hank Williams Jr., Dave Rich, The Other

Like the best parties, it turned out to be everything and more than they’d even hoped for. So many more people were involved in the process that we can get on the page here. Suffice to say, making records over the years has required a broad sense of community and an always-surprising mix of independence and unity, inspiration and utility. Some of our best memories are those where as many of our folks as as possible were together in one place at one time. In those moments, it was just a great thing just to be there. And with others looking in . . . this was a joy one could only be infinitely lucky to feel and to take for granted, as well.

The Blind Date Party was one of these, maybe the most improbable one yet. It’s for everyone who’s here and it’s in the name of everyone who’s gone but will never go and will always live with us here. This album will too.

And thus, we are entertained.

Darryl says: Combining the best elements of each others talents 'Blind Date Party' finds Bill and Will in fabulous form. Mellow, dark, country-folk laments to snuggle up to during the cold winter months.