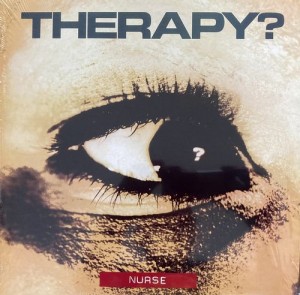 Therapy? are an alternative metal band from Northern Ireland. The band was formed in 1989 by guitarist-vocalist Andy Cairns from Ballyclare and drummer-vocalist Fyfe Ewing. Their line-up was completed when the band recruited Larne bassist Michael McKeegan. Nurse was the first record by Therapy? for A&M (their first of 4 for the label), it was released in 1992 and moved the band to a more industrial sound. The album reached no 38 in the UK album charts. The album had the breakthrough single Teethgrinder which got to no 30 in the UK charts, its mixes appear on the CD bonus disc

This version comes with a bonus disc of demos, B-Sides and live material curated by drummer Michael McKeegan and mastered by Andy Pearce; the original album uses the master by Harvey Birell that was used on the acclaimed Gemil Box. The booklet contains a new sleeve note by Ex Kerrang editor Paul Brannigan who has interviewed the band about the album and the time period around it.